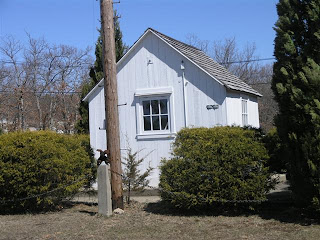 I'm sitting in front of one of  five radio shacks built in New York, this one being the fourth and is still being used today.

Originally located in Babylon, New York, this small Marconi Wireless Station was used to transmit with ships at sea.  The wireless station stood next to the Jacob's cottage which was on a five year lease to the Marconi Wireless Telegraph Company.  The cottage and the small station served as a station and a training school as well as an office and generating room on first floor of the house. The second floor was where  messages were sent and received.
The Marconi Wireless Telegraph Company operated for 10 years until the Marconi Method, which was the best way to send and receive messages,  became obsolete due to short wave technology.  For 20 years, the building was used for electrical experiments by local boys and as a paint storage shed by the farmer who owned the property.

The building was first brought to the attention of radio pioneer Edwin H. Armstrong by his friend, a former third assistant Technical Officer who used to work at the Babylon station.  In 1930, Armstrong bought the station and moved it out to its present location in Rocky Point at which time he gave the building to the RCA Transmitting Station in Rocky Point where it was stood in front of RCA's Building #1.  It was later stored inside a barn where it deteriorate so badly that it couldn't be moved to the 1939 World's Fair.  The little shack survived two fires while inside the barn. 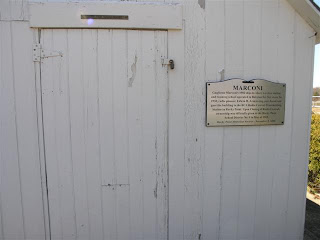 The sign on the door reads:  "Gugliemo Marconi's 1902 ship to shore wireless station and training school operated in Babylon for five years. In 1930, radio pioneer, Edwin H. Armstrong purchased and gave the building to the RCA Radio Central Transmitting Station in Rocky Point.  Upon Closing of Radio Central, ownership was officially given to the Rocky Point School District #9 in May of 1969.  Rocky Point Historical Society, November 5, 2006."

In 1969, due to satellite communication, RCA was planning to close the transmitting station when it again changed owners. RCA Station Engineer, Robert Lundquist presented the Marconi Station to the Rocky Point Free School District #9 at the suggestion of Mr. Frank J. Carasiti  and was moved from the barn across the street to the Joseph A. Edgar School where, in 1972, the building was finally renovated. 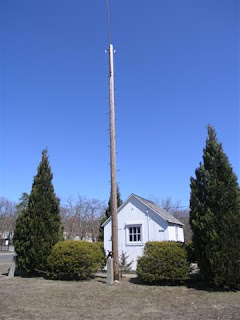 The little station would be moved again in 1989 before it was moved to its final home at the Frank J. Carasiti School in 1994 where it currently sits on the grounds today. It has been used by amateur radio groups since 1987.

Here are links to several interesting articles with a more detailed history and some pics.

Article titled The 1902 Marconi Building where I borrowed some of my information and two pictures.
http://www.rockypointhistoricalsociety.org/Marconi%20history.htm

Long Island Ruins and Remnants site which contains a lot of good information.

Arcticle on Marconi Wireless from the Titanic and Nautical Resource Center.
http://www.titanic-nautical.com/Marine-Wireless-G-Marconi.html