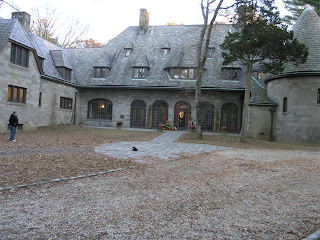 A famous chateau in France?  No, this is Wereholme or the Scully estate, in Islip, recently renovated and home to the Seatuck Environmental Association, a not for profit, member supported organization, which I will get back to later.

The history of this beautiful estate, which just opened for "work in progress" house tours in April, 2010, goes back to the late 1880's when the 70 acre Scully estate was part of Windholme farm, a 300 acre "gentleman's farm", which used to be across the street from Wereholme.

Windholme was a summer home owned by coal magnate Samuel Peters, who enjoyed fishing and boating on the Great South Bay with his wife Natalie and two children Harry and Lousine.  The Peters eventually divided up the property between their children with Harry taking 200 acres to the east side and Lousine taking the 70 acres to the west. 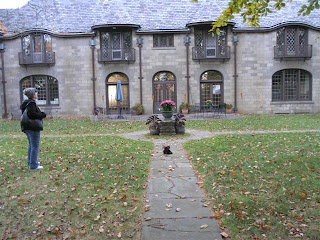 The Scully estate or Wereholme was built for Lousine Peters and her husband, Harold Weekes in 1917 on the 70 acres that she inherited.  Inspired by a French chateau, it was designed by architect Grosvenor Atterby, who also designed Forest Hills Gardens and part of the Metropolitan Museum of Art.

Lousine then passed the estate over to her only child, her daughter, Hathaway or Happy as she was better known.  In the 60's, Mrs. Scully, who had no children, left the estate to the National Audubon Society.

Across the street, Happy's first cousin, Natalie Peters Webster, donated her father's 200 acre estate to the federal government who then created the Seatuck National Wildlife Refuge.  In 1968, Natalie's husband, Charles Webster, started the Seatuck Environmental Association, whose offices are at the Wereholme estate.

Upon Mrs. Scully's death in 1984, Audubon moved in and used the estate to house its Living Oceans Campaign.  Suffolk County purchased Wereholme from the Audubon Society in 2004 to establish a nature center and protect open spaces.  The County just completed an extensive renovation of the estate and also signed a long term agreement with Seatuck to manage and operate the facility.


What I really loved about this estate was that it was small in comparison to others on Long Island.  It made you feel as if you really at home.  Seatuck's offices were actually open and were very accommodating in letting us tour the house. A special thanks to Peggy, our tour guide and everyone else involved with the tour today.

Seatuck itself has an extensive history. In 1968, while continuing to live on their 200 acres, Charles and Natalie Webster established the a National Wildlife Refuge to manage and conserve suburban wildlife.  In 1979, the Suffolk Research Program, together with the Peter's family trusts, the Fish and Wildlife Service and Cornell University Lab or Ornithology conducted tests on a variety of subjects, including colonial nesting birds, salt marsh management, deer and raccoon populations and Lyme disease.  When Cornell bowed out in 1989, Webster founded the Seatuck Environmental Center for continued research. In 2002,  Seatuck began working with Suffolk County  to establish a nature center at the Scully sanctuary across the way from Windholme.  In 2007, Seatuck would move its offices over to the mansion, where they still reside today.

As usual, I am linking Seatuck's site at the bottom where it will explain more of the history of Wereholme and what Seatuck actually does.  Enjoy!

To see the history, check under Nature Center and it will explain everything in more detail.

Here are some pictures I found of the Peter's estate, Windholme

Find the table of contents and click on Islip, NY to see the pictures. They are on pages 140 and 144.

another link with more pictures

http://historichouses.wordpress.com/2010/07/14/wereholme-weeks-estate-scully-estate-seatuck-environmental-association-islip-ny/
Posted by clyde at 4:53 PM