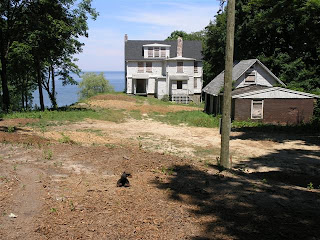 This modest house that I am sitting in back of was the summer home of Booker T. Washington from 1911 until 1914. The house, although unoccupied since the 1990's, has had local designation status since 2005 and is nominated for the National Register of Historic Places. The property was bought up in 2007, the new owner unaware of its historical status.  His idea was to tear down the existing house and build a brand new retirement home in its place.  When the owner discovered the historical status, he petitioned the Town of Huntington to waive it. A fight to save the house from demolition ensued and in 2009 the owner withdrew his petition. 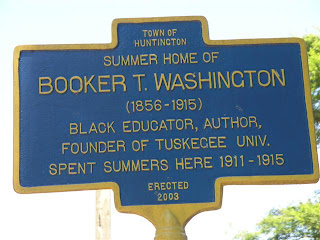 The house is now on the endangered list as of 2010.  Situated on a cliff overlooking Long Island Sound, it is located in an erosion zone and is in danger of falling into the water. The plan is to move the house and to stabilize the shoreline but this still has to go before a public hearing to be approved.

The history of this historic house is just as fascinating.

It all begins with Theodore Roosevelt inviting Mr. Washington to dinner at the White House in May of 1907.  Two days later, he spoke at the Huntington Opera House.  This was Washington's first visit to the Huntington area.


Around this time, Mr. Washington was in the market for a summer home on Long Island and was offered to rent the Van Wyck farm in West Neck by its current owner at the time, Helen Van Wyck Lockman.  Mr. Washington accepted the offer and sent Mrs. Lockman a deposit four days later explaining that he would be using the place for the summer.  He spent four summers at the farm when, in 1911, decided to buy a house in a secluded spot in Fort Salonga, overlooking the Long Island Sound. 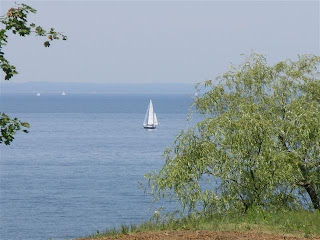 There was no opposition to Washington purchasing a summer house here and participated in many local activities such as speaking at local churches and teaching Sunday school.

His stay in Fort Salonga was short-lived however, when he sold the house to Henry Brush in 1914.  He bought a house in Huntington Village from Brush as an investment.  He would die a year later in January of 1915 at the age of 59.

After his death, the Fort Salonga property passed into the ownership of the Huntington Land Company in 1915 .  Eventually, the property would be bought up by a family from Forest Hills who used it as a summer home for many years until the death of the last member in 2005 when it was acquired by a local contractor.

As for its current owner, he was urged to build his home closer to the road, behind the relocated historic home.

We were riding around the neighborhood on Labor Day and paid a visit.  The entire area is all overgrown.  No one seems to be taking care of it.  There was some damage to the house due to the recent storms that we've had, but for the most part, it's still standing.  I am just wondering now if the current owner is just waiting for this house to collapse into ruin so he will be able to build on the property.

Here are some of the links that will explain more on this historic house.